Without Taylor, Herd fall to Buckeyes for first loss of season 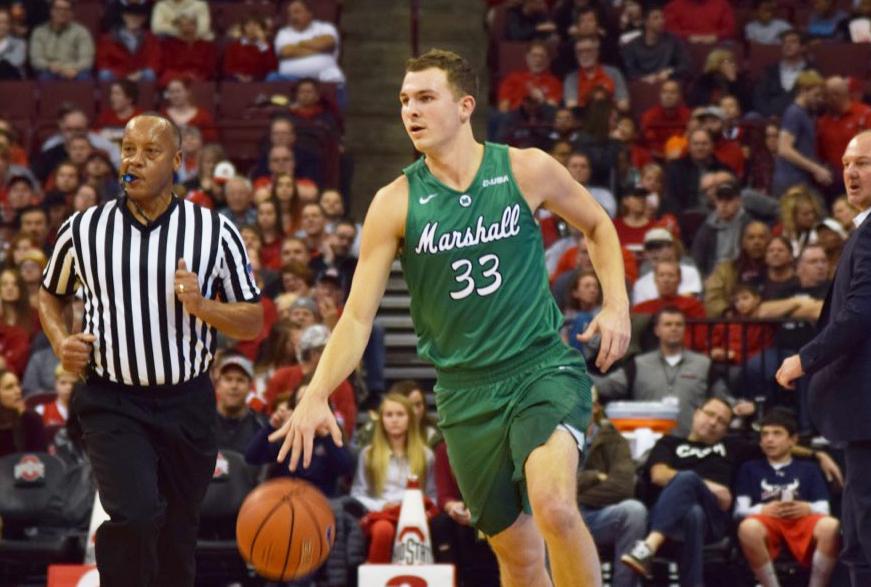 Marshall junior guard Jon Elmore brings the ball up the court against Ohio State Friday night. Elmore recorded 25 points in the Herd's 111-70 loss to the Buckeyes.

Coming off four straight wins to open their season, the Marshall Thundering Herd men’s basketball team entered Friday’s matchup with the Ohio State Buckeyes on somewhat of a roll.

That is, until the opening tip-off.

When the final buzzer sounded, Marshall found itself on the wrong end of a 111-70 blowout at the hands of the Big Ten contenders, a shellacking that doubled as a learning experience and Marshall’s first loss of the young season. The outcome was ugly and the road to it was seemingly even worse.

The Herd looked to be on the right track to start, opening the contest with a deep three from Jon Elmore. But, the Buckeyes would seize control following the three and not look back, going on a 22-6 run over a six-minute span in the first half. Ohio State led by as many as 26 points in the half as Marshall’s offense floundered, turning the ball over 6 times.

Coming out of the half time break, the Herd look rejuvenated, immediately going on a 15-6 run to cut the deficit to 15. But, that is as close as the Herd got, Ohio State’s athleticism proving too much for Marshall to overcome.

After letting Marshall claw its way back into the game, the Buckeyes woke up, putting their foot on the proverbial jugular of Marshall. Ohio State only allowed the Herd to score 21 points over the final 15 minutes of play, forcing Marshall to shoot a season-low 38 percent from the field.

Following the game, Marshall forward Jon Elmore was straightforward as to why the Herd came up short.

“They got a lot of easy buckets,” Elmore said. “I think most of it was poor on our part, we didn’t show up to play. The ball was stagnant; we didn’t get back on defense.”

Elmore led the way for Marshall with 25 points, but only shot 40 percent. The junior admits the team will learn from a defeat like this.

“We kind of got sent back to reality,” Elmore said. “We know what we need to work on and we’re going to go back to the drawing board and try and execute a little better and keep improving.”

Marshall’s biggest weakness entering the game was interior play. Already an undersized team, the Herd were without senior Ryan Taylor, who was serving a one-game suspension following his ejection from the Herd’s win over Jackson State last Saturday.

Taylor’s absence left its mark on the game as Ohio State dominated the paint, outscoring Marshall 62-24 inside. The Buckeyes also cleaned the glass with ease, hauling in 27 offensive boards, as well as 61 total rebounds, a record under head coach Thad Matta.

“We were missing our glue,” D’Antoni said. “If we had had Ryan, it may have helped us do the things we do. When we first came out, that wasn’t Marshall basketball. The ball wasn’t moving like it was supposed to. We weren’t finding good shots, we ended up taking quick, bad shots.”

Even Ohio State head coach Thad Matta recognized what Taylor means to Marshall and could see the stark contrast between the film with him and the product on the court without him.

“Obviously, [Taylor] is a big part of what they do and how they do it,” said Matta. “He seems like that energy guy and really adds some athleticism to their team.”

Following the loss, the Herd now have to go back to the drawing board before they earn their fifth win. Marshall will have another crack at a school from Ohio, however, this time against longtime rival Ohio University. The Bobcats travel to Huntington this Wednesday for a 7 p.m. tip-off.