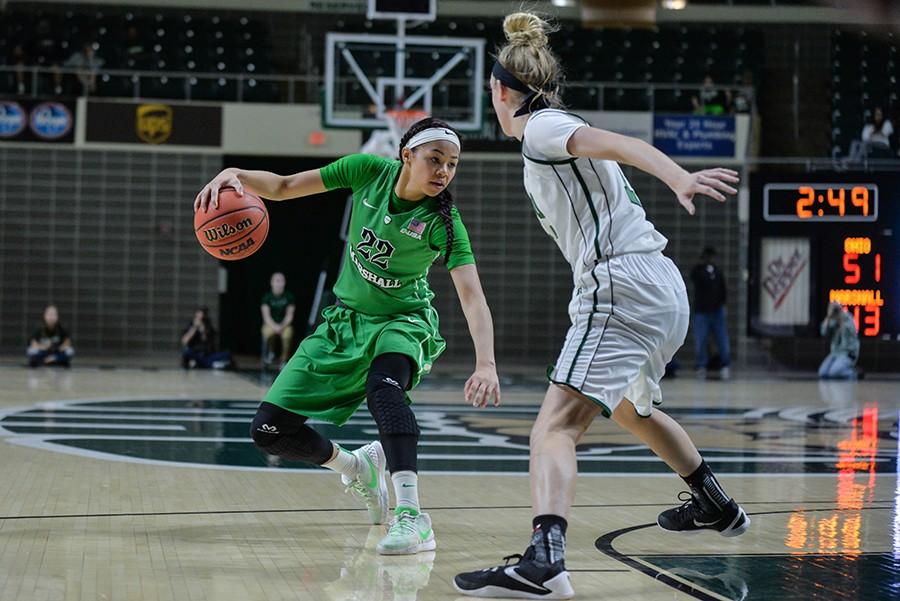 File Photo Marshall’s Kiana Evans surveys the defense as the Herd take on the Ohio Bobcats in a WNIT game last season in Athens, Ohio. Evans set a new career-high in points Tuesday night with 19.

Despite a sluggish first half, the Marshall women’s basketball team was able to overcome their struggles Tuesday night, riding three career-highs en route to a 77-67 win over Florida A&M in their home opener.

The Herd came out of the gates fast in the first quarter, out-rebounding the Rattlers 13-4 and jumping out to a 17-15 lead to end the quarter. But, the second quarter was not as kind to head coach Matt Daniel’s team.

After shooting an abysmal 20 percent in the second frame, Marshall found itself down heading into the halftime break after FAMU capitalized on the Herd’s misfortunes. The driving force behind the turnaround was the Rattlers’ defense. Florida A&M elected to switch to a full-court press in the opening moments of the second quarter, a move that caused all kinds of headaches for Marshall. The Herd turned the ball over eight times as a result of the increased pressure and FAMU made the Herd pay for their mistakes, recording 10 points of the eight turnovers, taking a 32-29 lead into the halftime break.

Marshall used the halftime break to make the appropriate adjustments, putting together a more complete third quarter. After only having four points at the break, senior Talequia Hamilton asserted her dominance, scoring 10 of her career-high 26 points in the third, helping the Herd to a 37 percent shooting effort over the span of the quarter. Despite their efforts, Marshall still found themselves on the wrong end of the score, trailing 52-49 heading into the final quarter.

It was not until nearly five minutes in that Marshall finally overcame the deficit. Hamilton again made her presence felt, hitting a layup, drawing the foul and hitting the subsequent and-1 free throw to draw the game even at 57. Just some 20 seconds later, Marshall would take the lead for good, thanks to senior Kiana Evans, who scored 11 of her career-high 19 points in the final quarter. Hamilton and sophomore Shayna Gore made it a 12-0 following Evans’ basket, pushing the lead to 63-57. Thanks to Gore, Hamilton and Evans, the Herd shot 67 percent in the final quarter and the Herd would not look back, earning their second victory of the year with the 77-67 win.

Seniors Kiana Evans and Talequia Hamilton both set new career-highs in scoring and sophomore Khadaijia Brooks set a new career-high in blocks, with three. Despite their efforts, head coach Matt Daniel still feels like the team has yet to reach its full potential.

Even though he was disappointed in the overall play of the team, Daniel was proud of Hamilton, not just for leading the team with her scoring, but with her attitude, as well.

“Her energy was very, very good,” Daniel said. “She was 11-of-17 from the field, which is a great percentage, but her demeanor was good even when she missed shots. She gave us all she had and we needed it tonight.”

With this game now behind them, Daniel and the team have a quick turnaround facing them. Just three days after their clash with FAMU, the Herd face off against Coastal Carolina as a part of a men’s and women’s double-header at the Cam Henderson Center. Daniel says the focus will be getting better as a team between now and Saturday.

“We want to play good balanced basketball by committee,” Daniel said. “We had two players set career highs tonight. But win or lose, we need to play better and I want to feel better about it…I want to get better at the process.”

Marshall’s clash with the Chanticleers tips-off Saturday at 1 p.m. The Herd will seek their first 3-0 start since 2014-2015.