Herd to face FAMU in home-opener 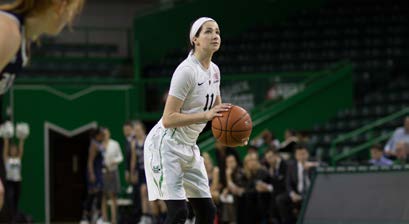 Fresh off a massive win on the road against University of Illinois, the Marshall women’s basketball team returns to Huntington Tuesday open the home portion of their schedule, facing off against the Florida A&M Rattlers.

Marshall will be riding the hot shooting of combo guard Shayna Gore as it heads back into Huntington. Gore, who hit the game-winning shot to knock off the Illini, recorded a career-high 29 points in the victory. She also added six rebounds and three steals, helping the Herd to a narrow 53-55 victory. Head coach Matt Daniel says the Gore needs to build on that if the team wants to continue its winning ways.

“We didn’t put a lot on Shayna’s back, but they were the plays that were available,” Daniel said. “It was a good outing for her. She started last year with a good outing and we need her to build on that. We want to maintain that momentum better than we did last year.”

By far, the most impressive stat from the win was that the Herd overcame a 13-point deficit. While ‘The House of ‘Paign’ may not be an easy place to play, Marshall did not let the hostile atmosphere derail their comeback attempt.

“I knew we would have some nerves,” Daniel said. “But I think our ability to bounce back is one of the characteristics we want our team to have. After that, we started to settle in and play…we played better basketball.”

With the Herd recording their first victory over a Power Five school since December 28, 2007 against Missouri, the focus now turns toward the Rattlers, a team coming off a season-opening loss at the hands of North Florida, 71-60. Tuesday’s matchup will be the first ever meeting between the two programs.

Marshall has had relative success against MEAC teams in recent history, however. The Herd have recorded four wins the past three seasons from the conference FAMU hails from.

The game will be the first of a two-game home stand for the Thundering Herd, before Marshall hits the road for two straight away games, both part of the University of Texas – Rio Grande Valley Invitational. The Herd’s tilt versus the Rattlers tips-off at 6 p.m.