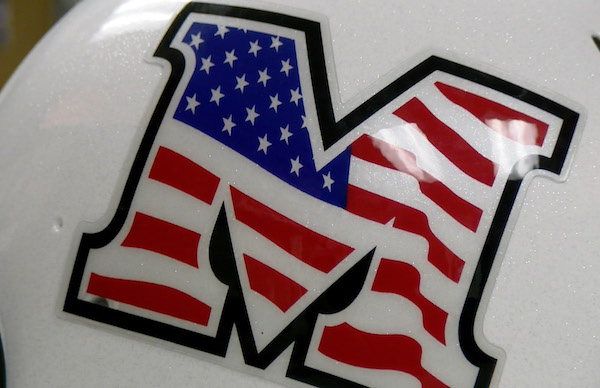 When they take the field Saturday, the Marshall Thundering Herd will be sporting a different look than they normally do.

Back in 2013, Marshall debuted flag-themed helmets for their Military Bowl showdown with Maryland. Now, the Herd are bringing back the patriotic lids once again, this time for their upcoming matchup with the Charlotte 49ers. It is the second straight season the Big Green have gone red, white and blue to honor the nation’s military. Last year, Marshall sported them in their 27-7 victory over Old Dominion.

The Herd’s equipment staff will be pulling out all the stops for the specialty helmets. Above the face mask, players will wear the name of one of the five branches of the military. The green and white striping on the tops will also be gone come Saturday. In their place will be two thin, red stripes on the outside of a thick, navy stripe adorned with stars. A smaller American flag can be found on the back, along with the traditional pink breast cancer awareness ribbon teams wear during the month of October.

“Anytime we do anything like this helmet-wise, uniform-wise, the fans absolutely love it,” head of equipment Zach Littleton said. “We’re always just trying to do the latest, the greatest thing and this is just one of those things they love.”

The players will not be alone in their support. Coaches will also be wearing special polo shirts with the design on them, as well as digital camo hats with the flag-patterned block-M on the fronts of them. It is the first year that coaches will be wearing the custom polo shirts.

Marshall’s military appreciation game kicks-off at 5:30 pm. A special flag ceremony is planned, including a veteran-led anthem and sky divers dropping into the stadium.