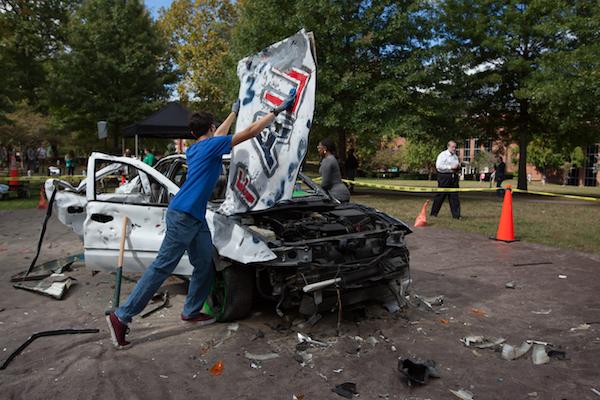 Anyone willing to pay $1 could spend two minutes smashing a car donated by Kelly’s Radiator Service. The event took place from 10 a.m. to 2 p.m.

WMUL provided gloves, sledgehammers and goggles for those participating.

Blake Kelmar, volunteer with WMUL-FM, said students come to take out their anger and frustrations on the car every year.

“If people are stressed about mid-terms or a relationship, they come out and smash the car,” Kelmar said. “Anything you knock off the car you get to keep.”

Kelmar said it’s one of his favorite events the radio station puts on.

“We’ve been doing this for the past 13 years and it’s the most fun way for us to raise money for WMUL,” Kelmar said.

To add to the fun of the event, the car, an Oldsmobile, was painted to represent the Florida Atlantic Owls, which is the team the Thundering Herd will be playing Saturday for the homecoming football game.

Dominique Gibson, a college of business student, said she enjoys relieving her stress from the fall semester out on the car.

“Sometimes the weight of the fall semester can really get to me,” Gibson said. “Between financial aid, class assignments and life outside of school, being able to release my problems in a creative way always seems to help me.”

After the bashing, the car makes its debut appearance the night of the Homecoming Parade every year.

“At 2:00, we are going to put the car on the trailer as we drive around in a big truck and toss out footballs,” Kelmer said.

WMUL-FM radio station has another event, Hair for the Herd, in the spring. During this event, students are able to get free haircuts, where their hair will be donated to kids with cancer.

Christian Davis can be contacted at [email protected]