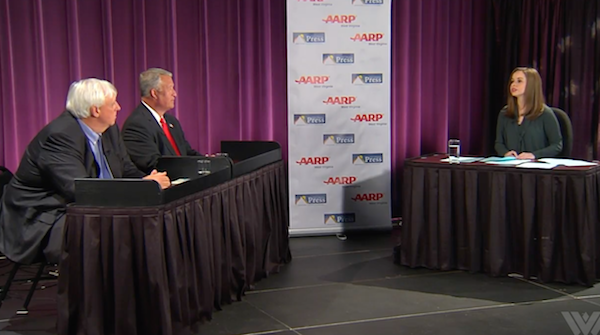 The democratic and republican candidates in the West Virginia gubernatorial race debated topics including diversifying industries in the state, the flooding in June, infrastructure and cutbacks in the state government’s budget Tuesday.

Republican Bill Cole is currently the president of the Senate in West Virginia. Democrat Jim Justice is the owner of The Greenbrier, a luxury resort located in Greenbrier county.

Justice said the state already has the resources to be at the forefront of the nation, the governor just needs to work with what is existing.

“We’ve proven how to be 50th,” Justice said. “We’ve proven that the drug epidemic is running rapid … I’ll move education to the centerpiece of where it should be … I’m not asking you to trust me, I’m asking you to not trust the other side.”

Cole said the governor should be someone who can diversify the business climate of the state.

“We have to partner with our businesses instead of being an impediment in the government,” Cole said. “Our natural resources and coal will remain important in this state forever, but we must diversify ourselves … We can bring those good-paying jobs to our state.”

“Just look at our teachers,” Justice said. “You realize that our teachers haven’t had a raise since 2014 … We currently have 600 vacancies in this state, 600 teaching positions that cannot be filled … We cannot cut our way out of this.”

Cole cited “decades of failed democratic leadership” as the reason for the current financial issues, and that the mission of state government should be reconsidered before making cuts in the government.

“We need to remember that citizens are the ones paying the bills,” Cole said. “The people supply the tax revenue … The government should be there for citizens.”

Cole said counties should consider consolidating schools because of population losses in the state. He said it makes more sense for children to go to schools that are close to them, even if it means crossing county lines.

Justice argued that Cole’s plan will not work and that government should make education a “driver” while “just finding a way to fund it.”

Cole said when discussing infrastructure that individuals sometimes forget that sewage and water are included among the needs of the state.

Justice said in order to fix the problems of the state, the government needs a new vision.

The candidates also discussed their positions on the legalization of marijuana in West Virginia.

Cole said DUIs increase with the legalization of marijuana, and there is no way for police to detect when someone is under the influence. However, Cole said he would be a proponent for medical marijuana in West Virginia.

Justice argued that he would “probably be supportive” of medical marijuana, but the state needs to be focused on the drug epidemic in the state. Cole and Justice were in agreement about the need for strides to be made in battling the drug epidemic.

Oct. 4 marked the first gubernatorial debate this election season. The debate took place at the Clay Center in Charleston and was sponsored by AARP WV and West Virginia Press Association.