I’ll determine my success, thanks 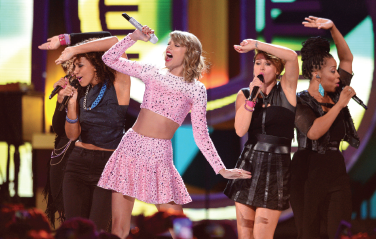 I don’t know about you, but famous people seem to live in another world. Sure, I look up to Beyonce like every other girl, but I sure as hell don’t think I live on the same level as her. I don’t idolize her success, but rather what she stands for.

I recently read a Time Magazine column by Charlotte Alter titled “How the Cult of Early Success is Bad for Young People.” Alter states while Taylor Swift and Malala Yousafzai, the youngest person to win the Nobel Prize, are great role models, they and other successful young people have set an impossible standard for success.

“But despite her best efforts to set a positive example, Swift also represents a generation of super-youth to which normal young people are inevitably compared,” Alter writes.

Who is doing this comparison? Who is comparing me to Swift or Yousafzai?

“Wow, Taylor, you are 22. Shouldn’t you have been published by The New York Times by now?”

In the real world, I am considered successful. I am finishing up college with minimal student loans and a relative idea of what I want to do with my life.

I can’t even try to compare myself to Swift. She just sold the most albums since 2004. She’s touring the world, singing about her life, being interviewed by Time and making bank. I’m in college, going to football games, hanging out with my boyfriend and drinking on Saturday nights. I think I’m doing pretty well for my age.

But, apparently, I’m moving “sluggishly” through my twenties.

“…The hyper-visual hotshots are getting younger and younger, whittling away at the maximum age limit at which someone can get their ‘big break,’” Alter writes.

Not once have I thought about the time frame for my success. For one thing, each person measures success differently. Is success making multi-millions, or is it having a happy, healthy family? For me it’s somewhere in between. Success isn’t determined by someone else, even if older generations try to measure it for us. Say we are lazy, go right ahead. The thing about millennials is we don’t really care.

“According to a Pew survey, young people today have more debt and less income than their parents and grandparents did at their age, which means we’re the least financially stable generation in recent memory,” Alter writes. “We’re making life decisions later than ever, delaying marriage and babies longer than previous generations did (partly because of the cash flow problems), and taking much longer to settle into a career.”

We refuse to settle. We wait longer to get married because we see what happened when our parents got married young. We get that life isn’t going to be handed to us. We know we are going to have debt, but we also refuse to settle for jobs that make us unhappy. We’ve seen what real life can do. It’s just not realistic to compare the rest of us to the likes of Taylor Swift.

Swift said it best in her Time interview, “Other women who are killing it should motivate you, thrill you, challenge you and inspire you rather than threaten you and make you feel like you’re immediately being compared to them.”

Compare me to Swift all you want, I know I won’t ever make it like her. And I don’t want to. I define my own success, not you.

Taylor Stuck can be contacted at [email protected]