Letter from President Gilbert about handling sexual assaults on campus 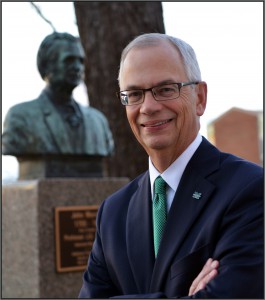 I just read (the) article about sexual assault in the Parthenon and wanted to make a statement. I did not recall saying that I did not care to comment. Quite the contrary, I do want to comment.

Sexual assault is a very serious problem on college campuses. I want to go on record as saying that I personally abhor the action of sexual assault or domestic/partner violence. It is my goal to have a zero tolerance for sexual assault at Marshall.

I have instructed the staff in the Office of Student Conduct within Student Affairs to do a thorough review and revision of our conduct policies and procedures so that we will protect the rights of our students and be fair in making decisions about possible sanctions. The revisions are about to be finalized, and I want to thank all of those who have participated in it.

I have spoken with Vice President Cedric Gathings and Women’s Center Director Leah Tolliver about bringing additional training to raise awareness about sexual assault. We are considering several campus initiatives such as the Green Dot program to train individuals and raise campus awareness about the seriousness of sexual assault. I want all of our students to know about consent and what constitutes proper consent when sex enters into a relationship. I also want bystanders to be aware of signs when someone is being coerced against their will into a possible sexual encounter so that they can appropriately intervene.

I will continue to speak out against violence and improper behavior such as sexual assault. I will do everything I can to minimize the occurrence of sexual assault on Marshall’s campus.