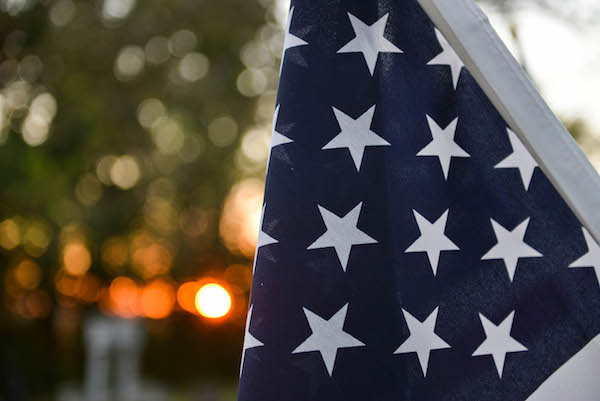 Spring Hill Cemetery was filled with American flags Sunday afternoon as Marshall University students and Huntington locals commemorated the lives that were lost 15 years ago in New York City.

This is the second year Marshall University students have marched from the Rec Center to the cemetery. Each student carried an American flag that they put in ground when they arrived at the “healing fields.”

Student Government Veterans Liaison Keith Schemel has led the march for the past two years and said events like this bring people together.

“Marshall University is kind of known for, unfortunately, a tragic event,” said Schemel. “And just recently West Virginia has had so much tragedy, whether it’s addiction or the flooding. Its just an event like this that brings everyone together and makes them realize these are things that we need to come together for.”

The ceremony included speakers who had a personal connection with the attacks in New York. Tom Bowen, a Huntington native, served with the search and recovery teams at the World Trade Center. Bowen has been the driving force behind the annual ceremony at Spring Hill, where he has also begun the process of making a national memorial for the attacks.

Two large pieces of subway tracks stood out of the ground next to the healing fields. The tracks were brought down from New York to be the beginning of the 9/11 memorial in Spring Hill. The tracks came from the subway system that ran under the World Trade Center and Bowen told the crowd this is how thousands of Americans would commute to work everyday.

Instead of talking about his experiences, Bowen told the story of Mathew Pescerno, a father of three who went to work in the North Tower that day and never made it home. The passionate story was told by Bowen as if he had known him for the past 15 years. Bowen and the search team he was with found Pescerno’s wallet with a picture of his family inside a week after the attacks.

Bowen began to break down as he told the crowd the story, “Our team was shaken, I think for the first time we all realized in that moment that this man was like one of us on his way to work to provide for his family … Everyone in the group was stunned, they didn’t know what to do.”

The story brought tears to the eyes of the audience and, in particular, Bowe Pence, a man who rode his motorcycle all the way from New York to Huntington, where he was followed by over 100 other motorcyclists.

The Warriors Watch Riders is an organization that puts together memorial services, send offs and welcome homes for armed forces. Pence led the motorcade to Huntington to show his gratitude to Bowen for the work he had done with the recovery process of 9/11.

Each year the ceremony has grown in new ways and Bowen said he plans to continue to grow the memorial at Spring Hill to display this.