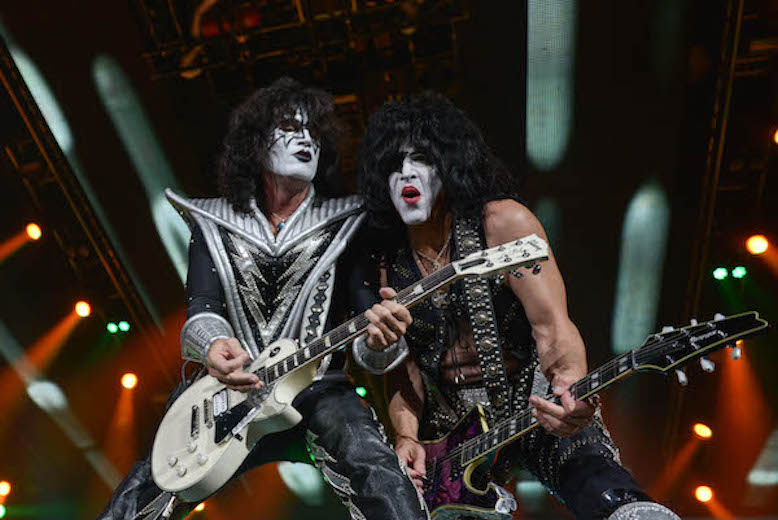 At 2 p.m. on Saturday afternoon, downtown Huntington was already flooded with ChiliFest goers, football fans and a dedicated KISS army. The Big Sandy Superstore Arena had some lucky fans lined up waiting to enter the arena for a special meet and greet with the band.

Jared Stevens, 22, was sitting outside Big Sandy’s with his father Ricky as they waited to see KISS perform a special unmasked acoustic set for a select group of fans.

Stevens and his father traveled two hours from Taylorsville, Kentucky to see the band. Stevens said he has seen the band three times on just this tour and said, for him, seeing them play smaller venues in smaller towns makes this tour special.

“Oftentimes they just go to bigger cities,” Stevens said, “and a lot of people are having to drive all over to see them. But that’s been something that’s pretty neat with this tour, they’ve all been small towns and they’re just visiting places they haven’t been in a long time.”

KISS took the stage around 9 p.m. where they electrified fans with their iconic stage presence and over-the-top pyro techniques. They played classics such as “Dr. Love,” “Rock and Roll All Night” and “I Was Made for Loving You.”

KISS has been touring since 1970 and has often stopped in Huntington and Charleston on their American tours. But as the band gets older, opportunities for fans to see them live have grown slim.

For Ryan Bishop, 19, this was his first time seeing KISS and he said when he saw they were coming to Huntington, he wouldn’t miss it for the world.

“When I was a kid, my uncle dressed up as Gene Simmons for Halloween, and I thought that was the coolest thing in the world. From that point on, I needed everything KISS,” Bishop said.

The “KISS Army” has been known for their dedication to the band and have clearly not stopped growing their following.