KISS returns to Huntington for “Freedom to Rock” tour 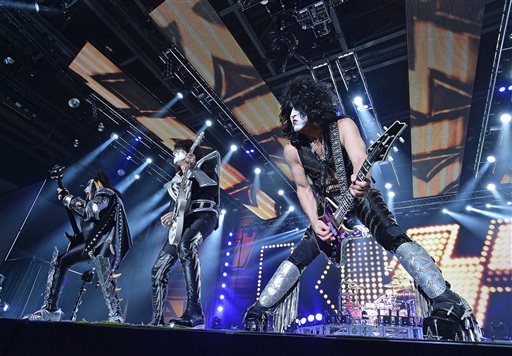 Pictured from left to right are Kiss members Gene Simmons, Tommy Thayer and Paul Stanley as they play "Deuce" during their Freedom To Rock tour concert on Saturday, Aug. 27, 2016, at Erie Insurance Arena in Erie, Pa. (Christopher Millette, Erie Times-News via AP)

Nov. 26, 1975 was the date of the first show KISS, the face-painted classic rock band, played in Huntington, West Virginia. The concert was held at the Veterans Memorial Field House on Marshall’s campus, where Marshall’s basketball teams played until the programs made the move to the Cam Henderson Center.

After that show, KISS continued to tour through Huntington or Charleston in almost every American tour throughout the 70’s and 80’s. Their last show in Huntington was Jan. 18, 1988 on their “Crazy Nights World Tour,” where the band toured without the famous painted faces and classic KISS leather attire.

Now, KISS is once again returning to Huntington for their “Freedom to Rock” tour. They will perform at the Big Sandy Superstore Arena Saturday, August 10. Tickets are still on sale and prices are ranging from $25 to $475.

KISS is regarded as one of the most influential rock bands of all time. The New York City based band revolutionized the way live concerts are seen. The band was inducted into the Rock and Roll Hall of Fame in 2014, where all four original members were there to accept the award.

KISS will only have two of their original members in Huntington on Saturday, with Gene Simmons on bass and vocals and Paul Stanley on guitar and lead vocals. The band still plays their classic songs such as “Rock and Roll All Night,” “Detroit Rock City” and “Love Gun.”

Tickets are being sold at the Big Sandy’s box office and online at Ticket Master. The concert will begin at 8 p.m. with The Dead Daisies opening up for KISS.