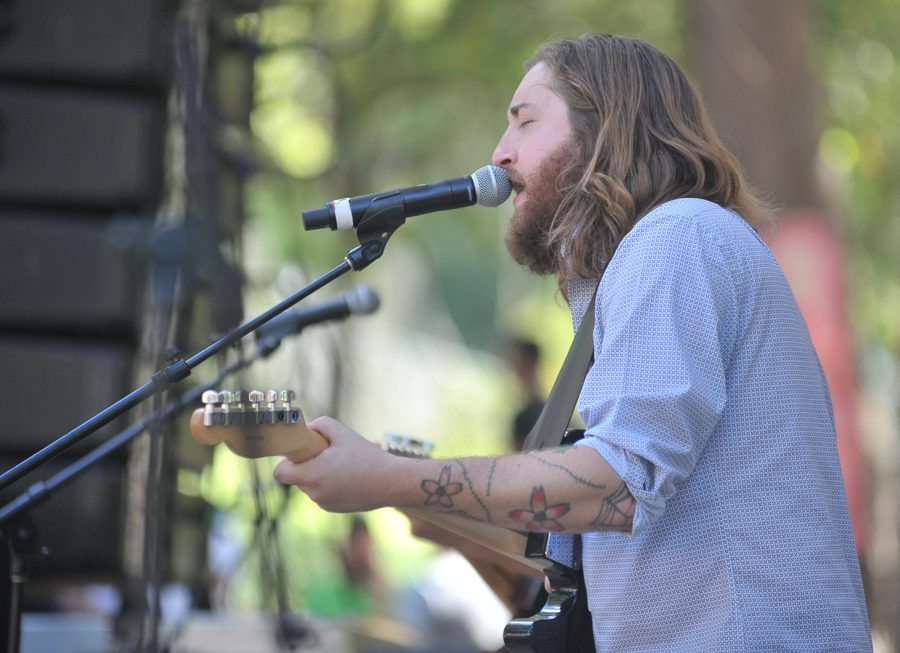 Nick Dittimer and the Sawdusters bring Americana to the Huntington Music and Arts Festival stage, September 3, 2016.

The Ritter Park Amphitheatre was once again home to the Huntington Music and Arts Festival. Where Huntington locals came out to see local artists and appreciate the food and culture the city of Huntington has to offer.

The festival began Monday, with it being named “HMAF Week” by Mayor Steve Williams. The week continued with different events being held at different venues of Huntington each day. The main event was held Saturday, where Huntington musicians began playing at 12 p.m. through 10 p.m.

Headlining the Saturday’s event was Ona, a five-piece indie rock band from Huntington. Ona is in its third year of being together, but has been playing at venues like the V-Club and touring around the tri-state for some time now.

Tyler Childers was the main act Saturday with his Americana/country sound. For years now, Childers has been playing at HMAF, working his way up each year. HMAF creator Ian Thornton has known and managed Childers since he began playing in the Huntington area.

“The kid has earned it. I mean basically every year people have come to see Tyler, so I thought he had earned it,” said Thornton.

Both acts have been growing a larger following, playing at venues in cities such as New York and Nashville. But when each of them took the Ritter stage Saturday, the bands continued to praise the Huntington music and arts scene, saying that no matter how big of a venue they play, HMAF will always be a special place for them. That was true for many artists and vendors there that day.

New comer to HMAF, Brendan Fenn helped sponsor the event through his business Grindstone, a coffee house on wheels.

“I have been to a lot of big cities with great art and music scenes, but nothing like this, it is such a tight knit community and the artists here are so talented,” said Fenn.

According to Thornton, this year there were only eight returning artists, meaning there were 15 new acts that played at HMAF this year who were all upcoming artists around the tri-state area.

Thornton said he wants to continue to grow every year, while still keeping it about the local area and the artists.