COLUMN: The Problem with Shrugging off Melania’s Plagiarism 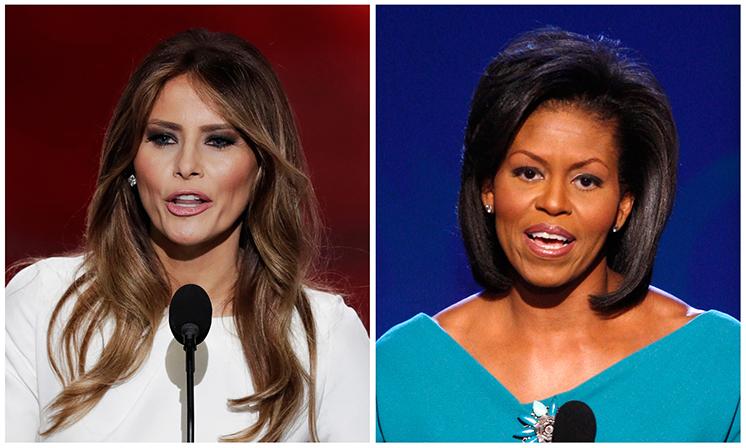 In the midst of the Republican National Convention in Cleveland, Ohio Monday, Melania Trump, potential future lady of The United States, delivered her first publicized speech about her husband’s candidacy on prime-time television.

Like a good journalist, Hill immediately did research on the phrasing, and upon further review, noticed Trump had recycled—nearly verbatim—entire paragraphs of First Lady Michelle Obama’s 2008 Democratic National Convention speech.

Hill began tweeting the similarities, which were quickly mass-retweeted and picked up by major news outlets.

The responses from Twitter varied: “Yup, pathetic,” user Mya Davis posted. “Shame on you Melania,” wrote Randa Anders. “Can’t blame you though, Mrs. Obama is brilliant!” Others drew parallels and debated that no political speeches are ever truly original.

“Good lord, a few words out of a speech?” wrote another. “Let’s not make her out to be Joe Biden.”

Overall, the Trump campaign, in its strides toward the Oval Office, has come across arrogant and sometimes careless— which can be interpreted as an obvious disregard for the prestige of the presidential position.

In debates, Trump has made a habit of targeting his competitors’ physiques instead of stressing efficient plans for managing international relationships and internal affairs.

This tendency to shrug off serious matters is alarming: If a NATO ally is attacked, how will he respond? What if it’s us? Will he have burnt our bridges and decades of collaborations? How isolated will we become from the rest of the world with this self-and-only-self-sufficient attitude?

In comparison to the rest of Trump’s campaign, not claiming responsibility immediately for the plagiarism sparked even more controversy. Donald, the former “Apprentice” reality star is known for firing employees, and it seemed natural to speculate he was searching for someone to blame.

Then Wednesday, a letter was released by the Trump campaign, typed on official Trump stationary.

“In working with Melania Trump on her First Lady speech,  we discussed many people who inspired her and messages she wanted to share,” wrote McIver. “A person she has always liked is Michelle Obama. Over the phone, she read me some passages from Mrs. Obama’s speech as examples. I wrote them down and later included some of the phrasing in the draft that ultimately became the final speech. I did not check Mrs. Obama’s speeches.”

The day after the plagiarism was discovered, Huffington Post satirically shared a photo of Melania, plastered with various famous quotes from American history with each quotation attributed to Trump.

The memes can be humorous, and I will be the first to admit a few of them made me giggle, but it’s also alarming for all who value the field of academics.

At Marshall University, one of the most thrilling experiences of college is Syllabus Week. As students, we return from our summer breaks with a handful of new classes, new supplies and a replenished supply of enthusiasm for the new chapter ahead.

Assignments are rare, and we have the opportunity to engage with new professors and classmates and reconnect with our campus organizations.

During the introductory process, professors reiterate the university’s plagiarism policy that strictly defines the act of academic cheating, offers examples of plagiarism and supplies students with tips to ethically cite information and “distinguish their own work from that created by others,” (Marshall University Handbook).

If found guilty of academic dishonesty, the handbook states, the student will receive a failing grade or even possibly be expelled.

For those of us who fall in a category with Hermione Granger, the threat of expulsion is a fate worse than most.   If academic dishonesty is so vile that college students can be expelled from their universities for committing the crime, why shouldn’t Melania be held to a similar caliber as the rest of her American counterparts? What does this model for the future of academia?

Brushing off Melania’s plagiarism, whether she or a designated speechwriter lifted the content, promotes the idea that it’s acceptable to take the easy way out.

For journalists, credibility is everything. We are hired or fired based on our abilities to produce quality, truthful content for our readers or listeners, and we are instructed from the beginning of journalism school to be objective in our reporting.

When we fail to do so, we make total jerks of ourselves and often lose the reputation worked so diligently to earn.

If those of us in the media profession shrugged off Melania’s plagiarism and treated it as casually as the campaign, would our audience question our reliability and credibility? I think yes.

Being accountable is a trait necessary for success in journalism and politics alike— regardless of your last name.