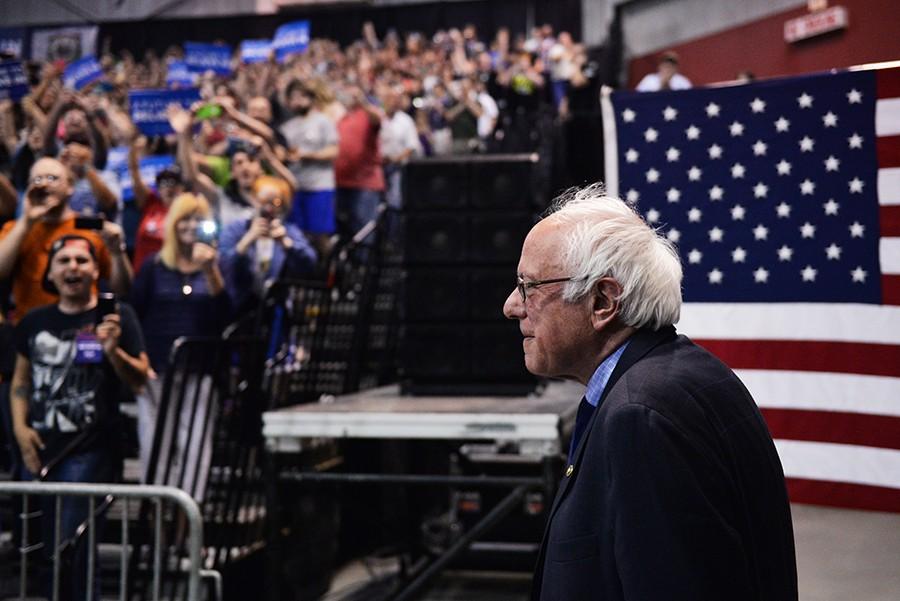 Presidential candidate Bernie Sanders hosts a campaign rally on Tuesday, April 26 at the Big Sandy Superstore Arena in Huntington, W.Va. The "A Future to Believe In" assembly attracted more than 6,000 supporters.

West Virginia is at the top of the list for national issues, democratic presidential candidate Senator Bernie Sanders said Tuesday at the Big Sandy Superstore Arena on a campaign stop as primary voting unfolded in five states.

Sanders addressed an estimated crowd of 6,400. The line for the first presidential visit to the state this campaign season wrapped around the Big Sandy Superstore Arena from the front door, along Eighth Street and Veterans Memorial Boulevard and eventually reached the Third Avenue side of Bob Evans on Sixth Street.

The crowd’s chants of “We are… feeling the Bern” were met with Sanders’ opening statement, “Unlike football or basketball, politics is not a spectator sport.”

Sanders said climate change needs to be addressed and the country needs to shift its energy system away from fossil fuels, but those working in West Virginia’s largest industry sector should be taken into account.

Sanders criticized media coverage of United States trade policies, saying it was not a “sexy” issue and that the policies are partially responsible for the lack of job opportunity in America. Sanders also criticized secretary Hillary Clinton for supporting these policies.

“As a result of these terrible trade policies, we have lost millions of decent paying jobs,” Sanders said. “Our message to corporate America is, you want us to buy the products you make, make these damn products here in West Virginia.”

Sanders said 54 percent of working age population has a job in West Virginia, attributing poverty to a higher mortality rate.

“What being poor is about in America is you die at a significantly lower age than people who have money,” Sanders said. “In McDowell County, 77 percent of children under 18 are living in poverty in the United States of America. In McDowell County, men can only expect to live to the age of 63.”

Sanders said in Fairfax County, Virginia, men live on average of 82 years of age and women are expected to live to 85, while in McDowell County, women expect to live to 73.

“I’m not using just West Virginia statistics because I’m here, this is a national issue.”