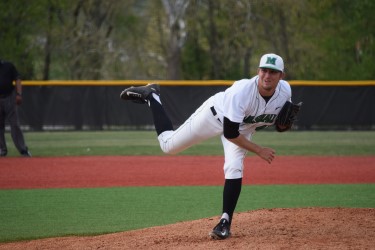 After an impressive start to the season, Marshall University freshman pitcher Wade Martin may have a bright future as a member of the university’s baseball team.

The young pitcher has had the opportunity to warm up his arm and contribute to the pitching staff despite thoughts of redshirting earlier in the season.

Martin said his inspiration to play baseball stems from a cousin, who is now a scout for the Boston Red Sox.

“Since I was old enough to hold and throw a baseball, I’ve been holding and throwing baseballs,” Martin said.

Martin said while he did not know initially how much time on the mount he would receive, he has already met his goals and aspirations that he set for his first year as a member of the Herd.

Martin said his coaches and teammates gave him the confidence to play and also adjust to the collegiate level.

“Coach Newman made me feel right at home,” Martin said. “Once I developed a relationship with my team and the coaching staff, my abilities started to grow and shine through.”

The Portsmouth, Ohio native said he can see an opportunity of playing baseball on a professional level one day.

“I’ve been blessed to advance my career so far,” Martin said. “And that’s what I’m working for every day.”

As the team prepares to face in-state rival West Virginia University, Martin said he is thankful to travel to Morgantown, West Virginia to compete because he remembers earlier in the season when he  was not on the travel team.

“I’m just super thrilled for the opportunity,” Martin said. “And I will make the best of it.”

The Herd and the Mountaineers meet 6:30  p.m. Wednesday at Monongalia County Ballpark. The original time was rescheduled due to inclement weather in the forecast.